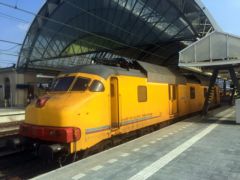 As a first in Europe, Clear CinCom has performed an on-track measurement analysis of EoG (ETCS over [E]GPRS) packet switched performance data. Normally this type of data is tested in a static lab environment, but using a specially fitted testing train from Eurailscout, the engineers of Clear CinCom were able to collect live KPIs in accordance with the draft O-2475 packet switched test specification for GSM-R networks that support both GPRS and EDGE.

The tests were conducted on the Dutch “Hanzelijn”, an ETCS level 2 track between the cities of Lelystad and Zwolle, over a length of 50km which include a tunnel and six EDGE enabled GSM-R base transceiver sites.  The findings of the radio telecom consulting firm were used to verify the draft EoG standard.

According to Clear CinCom director Martijn Kuijpers, this assignment came with specific challenges. “We developed a bespoke RF QoS measurement application with a client mounted in our testing train and a fixed server on the land-side. The two entities measured the packet switched KPIs, which allowed us to deliver detailed reporting to ProRail, which is the Dutch railway network operator. We used our in-house developed cloud-based network analysis reporting software to deliver the results to our client, which significantly increased the speed of our reporting and gave us a more productive back and forth with the client to deliver the results in a way that was most useful to them”.

Clear CinCom is a small, flexible, hands-on organization. We can provide you with telecom consulting services including temporary staffing or even complete turnkey project teams. We have an all-round expertise in all types of cellular radio networking, but highly specific experience in GSM-R (GSM-Rail), LTE (4G), UMTS (3G) and Tetra networks. We use advanced equipment and in-house developed software for validation, benchmarking and network audits.

Talk to our experts now

Do you have a specific question or would you like to know if Clear CinCom is the right partner for your project? Just send me an e-mail or give me a call on phone or Skype. My name is Martijn Kuijpers and I am director and principal radio planner at Clear CinCom. You can reach me by clicking the below button now.

Is it important for you to stay in the know on the latest developments in GSM-R, LTE, UMTS, 802.11p or Tetra networking? Then do not forget to subscribe to our newsletter.

You can contact Clear CinCom now by one of the following ways: call us on the phone, call us one Skype, or fill in the form so we can get back to you.